The Taggle network is an LPWAN solution based on world leading Australian developed technology operating in the 916-928MHz Low Interference Potential Device (LIPD) class licence band, which has been developed by Taggle Systems to provide one of the lowest cost, lowest power, longest range, and highest capacity LPWAN solutions available. The Taggle network is based on one-way transmissions from endpoint nodes to the Taggle receiver network, and is particularly well suited to battery powered endpoint applications with low data rate requirements, such as automatic meter reading, wireless sensors for smart agriculture and environmental monitoring, and cost sensitive smart city applications.

Corella is based on the popular XBee module format, and provides a single serial port with a simple "AT" command style interface to allow rapid integration of the module into both lab prototypes and volume production IoT devices. The module has a single radio transmit output via an SMA connector, and can be supplied with a 2dBi - wave dipole antenna to enable rapid connection to the Taggle network.

All receive functions are handled seamlessly by the Taggle network, with the user's receive data presented via a custom web portal. A range of data plans are available depending on the number of endpoints connected to the Taggle network and the frequency of messages per endpoint.

The revision A Corella module is compatible with 3.3V systems only.

Connection to 5V systems such as Arduino or Beagle Bone will require an interface shield to provide appropriate IO level translation and power supply regulation.

The default configuration will nominally consume 1.5mA during sleep mode. The main power draw is from the green power LED and the voltage overload protection circuit. These features can be disabled by removal of the two jumper resistors shown below. This will significantly reduce the power consumption resulting in a nominal sleep current of approximately 2uA.

Removal of the jumper resistor J1 shown in Figure 3 will deactivate the green power led and reduce Corella sleep current to approximately 95 uA. Deactivating the flashing red and blue LEDs can be achieved through AT commands, referred to in section 5.7 AT+LEDS .

Caution should be taken when removing J2 as the device will
no longer be protected from over voltage on the power supply input.

The following is a record of serial communications conducted using a terminal interface.

For detailed information and existing Library refer to the Corella + Raspberry Pi guide. 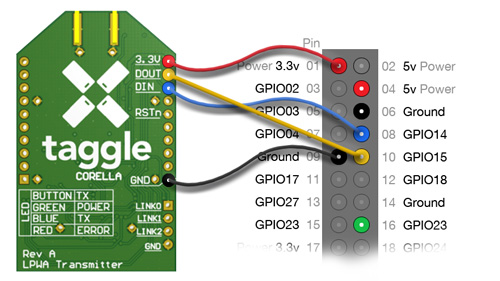 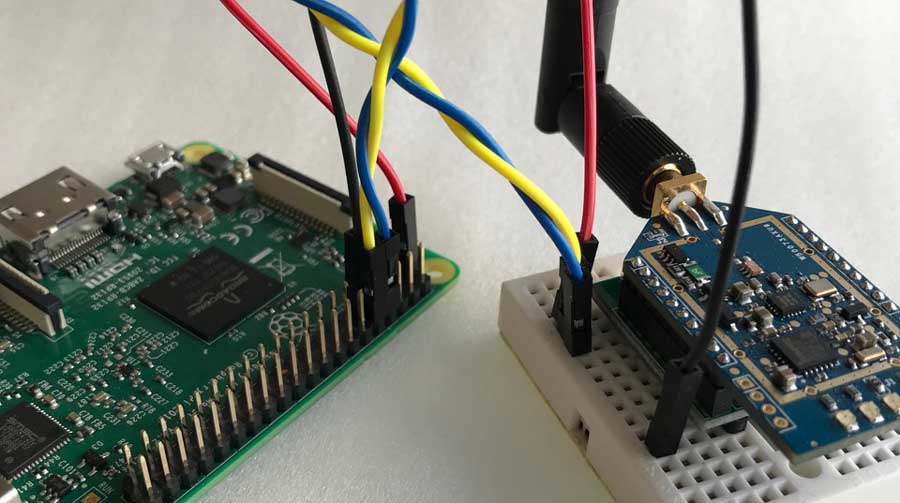 For detailed information and existing Library refer to the Corella + Arduino guide.

The Corella Arduino Shield is asymmetrical and will only fit properly using the correct orientation.

The Corella should be fitted to the shield as shown with the antenna SMA connector overhanging the edge of the board.

Taggle is an Australian based and owned developer of Low Power Wide Area (LPWA) radio technology offering low-cost, low-power, long range communications for many types of sensors and devices.

With a rapidly expanding international network, we service high-rise and urban centres, regional utilities, remote communities and farm monitoring. We work with our customers to deliver tailored solutions.

The Corella project enables experimentation, innovation, small-scale or specialized projects to be implemented without fuss or large investment.